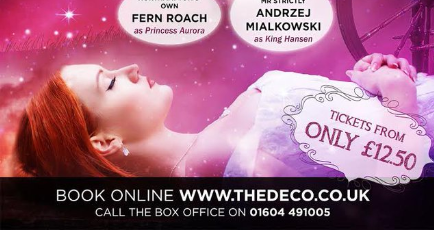 Wayne Bavin is best known as the afternoon presenter on BBC Radio Northampton, and has been performing Panto for years, unlike professional dancer Andrjez Mialkowski – best known for his Step-by-Steps dancing school – who will be treading the boards for the first time.

“Andrjez’s such a fantastic character, and was really enthusiastic, so we just had to offer him a part,” said executive producer Kevin Roach. “He’ll be brilliant.”

Comedian and children’s entertainer Mark Jones lived in Northampton until his career took him down to London, but he still has family living in, and around, the town, and is delighted to be making his first appearance at The Deco. “It’s a lovely theatre,” he said. “I feel so much at home there, and can’t wait for Panto time.”

Another local performer is Fern Roach, who is appearing in her third Deco Panto, and will be joined by the former BBC TV ‘Grange Hill’ star Colin Ridgewell, West End performer Chris Wills, and singer/actor Lydia Lucy, who are all back by popular demand.