MARKS & GRAN…’BLOKES OF A FEATHER 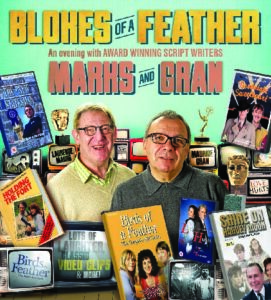 Forty years ago, Laurence Marks and Maurice Gran gave up their day jobs to become full-time comedy writers: their 40-year mission, to make millions laugh. The following decades took them from Borehamwood to Pinewood via Hollywood. They created a hatful of hit TV shows, including Shine On Harvey Moon, The New Statesman, Love Hurts, Goodnight Sweetheart, and of course Birds of a Feather. Along the way they won two BAFTAs and an Emmy, and founded ALOMO Productions, one of the most successful TV production companies of the 1990s.