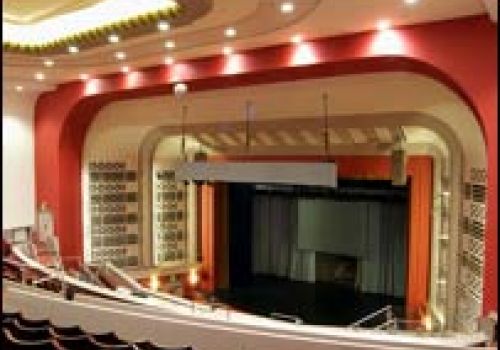 The Deco Theatre, Northampton’s hidden gem, is host to a wide variety of shows, the Christmas pantomime, and many training events. Over recent years the theatre has thoroughly re-established itself and continues to grow from strength to strength.

The Building first opened on Saturday 2 May 1936 in a blaze of publicity as “the Savoy”, described as “Northampton’s only super Cinema” and reported to be “the last word in comfort”. It was part of the ABC group, designed by their prolific house architect WR Glen and built in under nine months on the site of the original Technical College. It was constructed in the International Modernistic style and is arguably the best remaining example of Glen’s work, with all the main features still in place and sympathetically renovated.

The Savoy was very popular and originally held almost 2000 people in the 696 seat circle and 1200 seat stalls. It was designed both as a cinema and theatre complete with orchestra pit. It hosted shows and concerts as well as films.

In the 1950s it was renamed the ‘ABC’ in line with the group’s national branding policy and was the local venue of choice for the touring bands of the ’60s, including the Beatles in both March and November 1963, the Rolling Stones in 1965 and infamously PJ Proby in 1965, when he was arrested for splitting his trousers on stage!

By the mid-’90s, however, the ABC now renamed Cannon cinema was unable to compete with the modern multi-screen complexes and it finally closed its doors in 1995 with the appropriately named “Terminal Velocity”.

The building was derelict for five years until 2000 when it was refurbished into a multi-purpose venue opening in October 2004, and now is the home of The Deco Theatre.