The BID continues with its commitment to help make Northampton Town Centre a safe and welcoming place for all who frequent it.

By working with partners, the BID has been able to implement and support a number of initiatives to help with this.

The system directly feeds into West Northamptonshire Council’s ASB Case management team and into NBCP, who are based within Campbell Square Police Station. 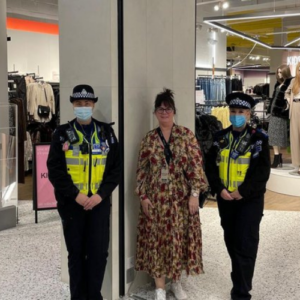 Town centre businesses have been given the opportunity of a dedicated police contact as part of a new ‘Cops Adopt A Shop’ scheme to cut retail crime in Northampton.

The campaign, which follows on from a meeting between the BID and Northamptonshire Police, Fire and Crime Commissioner Stephen Mold in 2021, officers have been visiting a number of retailers who had expressed interest in the scheme.

Retailers are able to have regular conversations with a named police officer, with a view to establishing a more cohesive approach to tackling town centre crime and a closer working relationship between police officers and retailers.

Our partnership with the Police, Fire and Crime Commissioner has allowed evening economy businesses the opportunity to obtain accreditation through the Licensing Security and Vulnerability Initiative (Licensing SAVI) for FREE.

Funded by the Safer Streets funding, businesses will see their fee waived for the first year.

What is Licensing SAVI?

Licensing SAVI, the Licensing Security and Vulnerability Initiative, is a confidential self-assessment tool designed to help the owners and operators of licensed premises provide a safe and secure environment for their managers, staff, customers and local community.

How does it work?

Once your Licensing SAVI assessment has been completed, you will be able to apply for the Licensing SAVI Award, which is star-rated and allows you to market your achievement by showing the public that you run a safe and secure premises.

What are the benefits?

Some of the benefits is that it will,

Provide information on effective management practices and operational security
Go a long way to demonstrate to the Responsible Authorities your compliance to the Licensing Act 2003, and can form part of your application under this act to assist with future refurbishments
If you reach the required standard, you will be able to apply for Accreditation and the Licensing SAVI Award which can be used to promote the safety of your business to your customers

Northamptonshire Police has delivered a number of anti-spiking devices for the BID to deliver to businesses.

The devices, called StopTopps, have been specifically designed to deter drink spikers by allowing users to simply place over their drink, and are suitable for most drinking vessels.

These devices have been made available to hospitality businesses and venues who will be able to offer these to their customers, free of charge.

They will also be available on the SNOvan.

To find out more information about StopTopps, please visit HERE.

Op Kayak is a police operation that was set up to tackle sexual offending in the night-time economy and sees Northamptonshire Police officers deployed within public town centre spaces, working with CCTV operators, all looking out for and disrupting potentially predatory behaviour.

Operation Kayak was launched when Covid-19 restrictions on pubs, clubs and other venues were lifted in the summer

Two police briefing and upskilling sessions were held in August 2021 for businesses.

Businesses received an overview of Operation Kayak prior to the launch, alongside an upskilling session detailing the types of predators and how they operate, the risk factors, types of attacks, and will         highlight how venues can help support Northamptonshire Police with this operation.

The Police, Fire and Crime Commissioner launched a new initiative to support the safety of women and girls using the night time economy in Northampton back in December 2021.

The Safer Nights Out Van (SNOvan for short) is staffed by volunteers, and will be a safe haven for anyone who is in need of help, becomes separated from their friends, needs basic first aid, or is in need of any other kind of support.

The van is out in Northampton every Friday and Saturday night and will be located on the All Saints Plaza.

The SNOvan is aimed particularly at improving the safety and confidence of women and compliments a wide range of work to help tackle the perpetrators and raise awareness of violence against women and girls.

It Only Takes One

It Only Takes One Campaign

It Only Takes One

Organisations across Northampton have come together to say “it only takes one community to say enough is enough” to violence against women.

Central to the programme is a new communications campaign that will raise awareness of all forms of harassment and violence against women and highlight that it only takes one person to say enough is enough to challenge the attitudes and inappropriate behaviours of some men.

The projects of this campaign include,

To find out more go to: www.itonlytakesone.org.uk

Supporting Campaigns of the It Only Takes One campaign

It only takes one minute to report on STREETSAFE

Using StreetSafe members of the public can identify where they feel unsafe on a map. Police forces will use the data to understand the specific concerns raised and to make informed decisions on safety.

It only takes one to SHOUT UP!

It only takes one minute to check the SAFER ROUTE

The Safer Route map has been updated and redesigned with new campaign slogan and colours.

It only takes one to GET SAVI

SAVI is made available to each Northamptonshire venue for just £4.50 instead of £120 till 31st March.